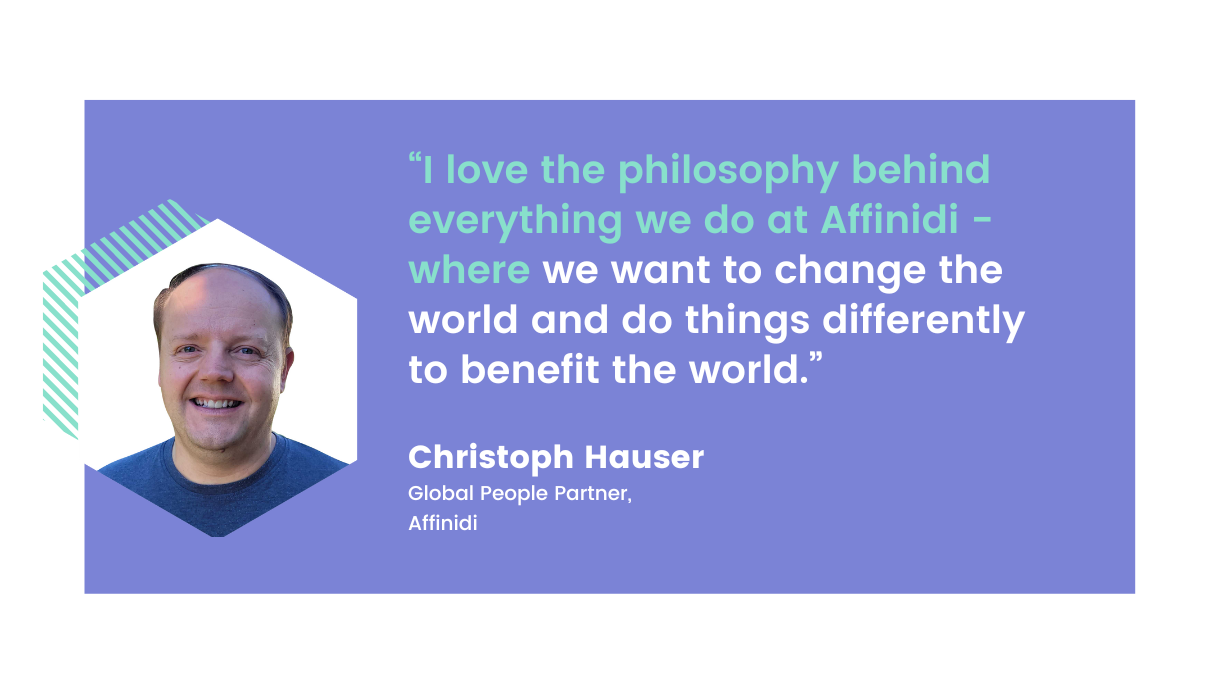 Meet Christoph Hauser, the Global People Partner in Affinidi, whose iconic laughter can light up anyone’s day. At work, his strong people skills and tech knowledge helps him understand the daily challenges of the Engineering team and inspire them to see new perspectives in their work.

Read on to discover Christoph’s everyday responsibilities, his vision for the future of the web, and a personal side that could surprise many.

How do you feel about working on the next generation of identity technology with Affinidi?

When we often read about cutting-edge technology, a new vision for a better world, and the innovative ideas of different people, we yearn to be a part of them and make a difference in whatever way we can. That's the kind of opportunity that Affinidi provides, as all of us can be trendsetters. We are trotting the unknown and establishing the path of next-gen identity technology for others to follow and benefit from the security and privacy that comes with it.

In particular, I love the philosophy behind everything we do at Affinidi - where we want to change the world and do things differently to benefit the world. Such lofty ambitions, and the intelligent people in the company who work hard to make these ambitions a success, inspire me greatly.

Thank you for inspiring us as well with everything you do. And this brings up my next question. Can you talk a bit about what you do at Affinidi?

I work across many areas within Affinidi, which I really enjoy. Specifically, I like to be involved in tech stuff, to understand what our great engineers and builders do. Note that I said tech and not engineering, so I'm not involved hands-on with the development or coding. Instead, my role is more about working with people to find out what they do and the solution they're building. Accordingly, I suggest a more thoughtful way of doing things. I help people to see new perspectives about what they can do with their products and solutions and guide them to think out of the box.

What I love about my role is that my decision-making, mentoring, and communication skills are well-leveraged.

What's the most fulfilling project you've worked on at Affinidi?

There are so many fulfilling projects, making it so hard to choose. But if I were to choose, I'd say the Global Pulse Survey for the Affinidi Engineering Team. Along with my colleagues, I created about 40 questions to understand if employees are highly connected and whether they'll want to refer their employers.

Interesting. So, what sparked your interest in identity technology in the first place?

I had worked on digital marketing and had no idea of identity technology before. I was attracted as I liked the philosophy behind it. I read up on Web 3.0 and its pros and cons. Though I am not a big fan of blockchain, I believe if used correctly and in the right direction, it will create a good impact and improve an organization's reputation.

My friend heard about Affinidi and told me that this company was a good example of how decentralized technology could be used for good. After my initial interview, there was no turning back.

What would you most likely be doing if you weren't in your current role (or anything similar)?

I like what I do, so it's difficult to say what I would be doing if not in my current role. Maybe I'll write a book about my travel experiences and go on a world trip with my family. I'd start in Asia, move to Africa, then perhaps Australia. (laughs)

Before moving on to personal questions, what is the one thing everyone should know about data ownership and identity, in your opinion?

Your data is your gold. Currently, web 2.0 companies are using it to make profits, and we have no overview of who has our data and what they're using it for. It is worrying too. For example, an insurance company took away $28.50 from my bank account even though I never clicked on anything, nor did I give my bank account number to this insurance agent. So, it's an intrinsic motivation for me to work in a company whose solutions could help to prevent such mishaps in the future.

As a data owner, you now have the opportunity to own and control your data. So, make the right decisions to avoid becoming victims of a data breach or scam.

Thanks, Christoph. Some rapid-fire personal questions now. Who are the people who inspire you the most?

Willy Brandt, the chancellor of Germany in the 60s and 70s known for his difficult decisions to ensure peace in the region, and Nelson Mandela, for his grace and dignity in accepting others' apologies even though he underwent suffering because of them.

Where can we catch you outside of work?

Probably a quiet place where I can write stories for kids.

What's the one thing that most people don't know about you?

I am a big arthouse film fan and love the Berlin movie festival - Berlinale. If you like black and white movies, I would recommend this Italian movie called Ladri di Bicicleta/ Bicycle Thieves from the 50s.

Time travel to the future and past. I'd want to see what happened when Jesus was born. Also, curious to know where we are heading as a society.