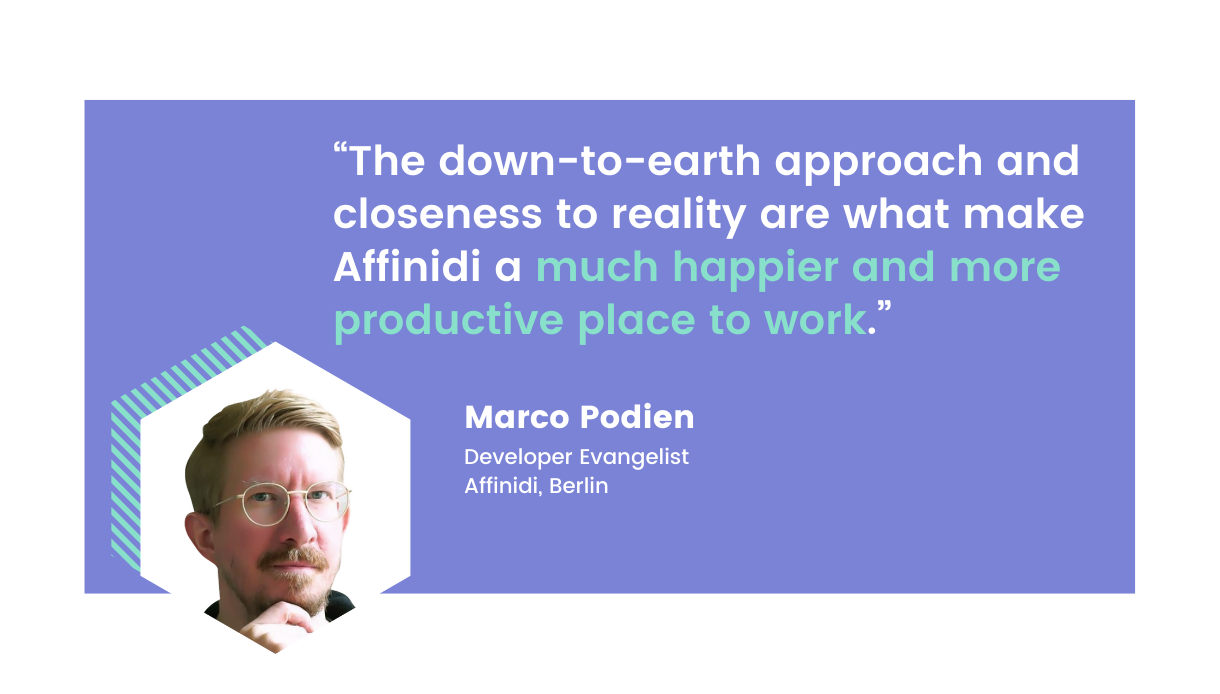 A familiar face to many developers, Marco Podien’s mission as a Developer Evangelist is in building a developer community and helping developers be more productive.

If you haven’t seen Marco in action, here's your chance to hear a little more about his motivations, work and how his journey with Affinidi has been so far!

How would you describe your role with Affinidi?

As a Developer Evangelist, it is my role to find out what the developers need to support their workflow, including additional code, use cases, documentation, inspiration on how and why they can use some of our offerings, and things around improving their experience with Affinidi’s tech stack.

When you’re a developer, it’s easy to get frustrated when you don’t have the information you need to develop your product. This is where I step in and provide all that they need, so their experience with Affinidi is a smooth and hassle-free experience.

That’s cool! So, what's the best part about being a Developer Evangelist?

The best part would be the freedom I have to help shape the business. For example, I devise and implement strategies to provide appropriate content to engage my target audience. Along the way, I also make educated decisions on which of these strategies are most suited for the business and I adapt based on changes in the business and developers’ needs.

And the misunderstood part?

Evangelist means someone spreading the word, and every stakeholder can be an audience of this evangelism. Evangelists are perceived very differently across other business functions. Currently, my role is more of a tech evangelist. The scope of my responsibility is often the most misunderstood. One of the original tech evangelists, Guy Kawasaki, took on all audiences at once when he was in Apple as they did not have a clear target audience. Together with the ecosystem, he developed something bigger than what the company could develop on its own. He is seen as someone who does a lot of Business Development. Since then, evangelists’ definition has been evolving, so there’s undoubtedly some confusion about what I do.

In general, what are the characteristics/traits that you think are essential for anyone looking to become a tech evangelist?

Having a background or interest in technology is important because you must understand the underlying technology quickly. Empathy is also important as you need to know where people might be struggling.

It also helps when you like to talk. It’s not a must, as some tech evangelists I know create more video content, but in my opinion, it helps to talk to developers directly.

Can you share an unforgettable episode you’ve had within Affinidi?

It’s been a short journey so far – I'm only in my 6th month. But it has been an incredible journey so far. My very first meeting was at 6 am on my first day. Right after that, I had to present something which I had no knowledge about, to a group of students. I was only catching up with our technology then, so I did not really have a context. Turned out to be manageable after all (laughs). The need to start running right away made my first few days at Affinidi an unforgettable learning experience.

What do you think is the main difference between Affinidi and the previous companies you’ve worked on?

I was in an e-commerce company before, with very big customers always waiting in line for latest and greatest features on the market. That left very little time for technology experiments and tinkering around with the newest trends in tech, which was something that frustrated me. Also, I was talking mainly to tech executives, but realised that I enjoyed talking to developers too because they bring about the creativity in solving problems.

At Affinidi, we are very deliberate in what we communicate. I was told honestly in my interview that we had a lot to do before this technology could fully penetrate the market. And I appreciated that honesty. This down-to-earth approach and closeness to reality are what make Affinidi a much happier and more productive place to work. I also have opportunities to speak to experienced and aspiring developers in my scope of work.

If you could describe Affinidi as an object, what would it be?

A gemstone, or an unpolished diamond. You can see that it has a lot of potential and value, and you’ll just need to work around the edges a little bit.

What advice would you give to people who are looking to join Affinidi?

Flexibility will help, as Affinidi is a young and growing company. You can expect an evolution of things that you may see from startups, but on a larger scale. We are growing fast. So, enjoy the ride!

Also, you're in the right company here if you like to take responsibility and ownership over things. There will be a lot of areas where you see that something needs to be done and it’s no one’s responsibility yet. In such cases, you can take ownership and do it.

Thank you, Marco! Shifting gears now to your personal side. If someone were to spot you outside of work, what would you most probably be caught doing?

Lately, I've been going out with my dog or running. In the next couple of weeks, you’ll see me carrying boxes because I’m about to move house. When it gets warmer, you’ll see me at Beer Garden.

So, what's the one thing most people don't know about you?

I haven’t been eating healthily for quite some time and I’m not in good shape now, but I used to do weightlifting when I was younger. I’m also a long-distance runner and I run half-marathons quite frequently, with 2 marathons under my belt. Maybe in October, I’ll fly to Dublin to take part in my third marathon.

If you could only have 3 apps on your phone, what would they be and Why?

If I had a superpower, it would be…

Super speed – I used to read Marvel comics and super speed was the most practical superpower. With super speed, I’ll be done with my daily work faster and that's good because I’m kind of impatient (in a good way).