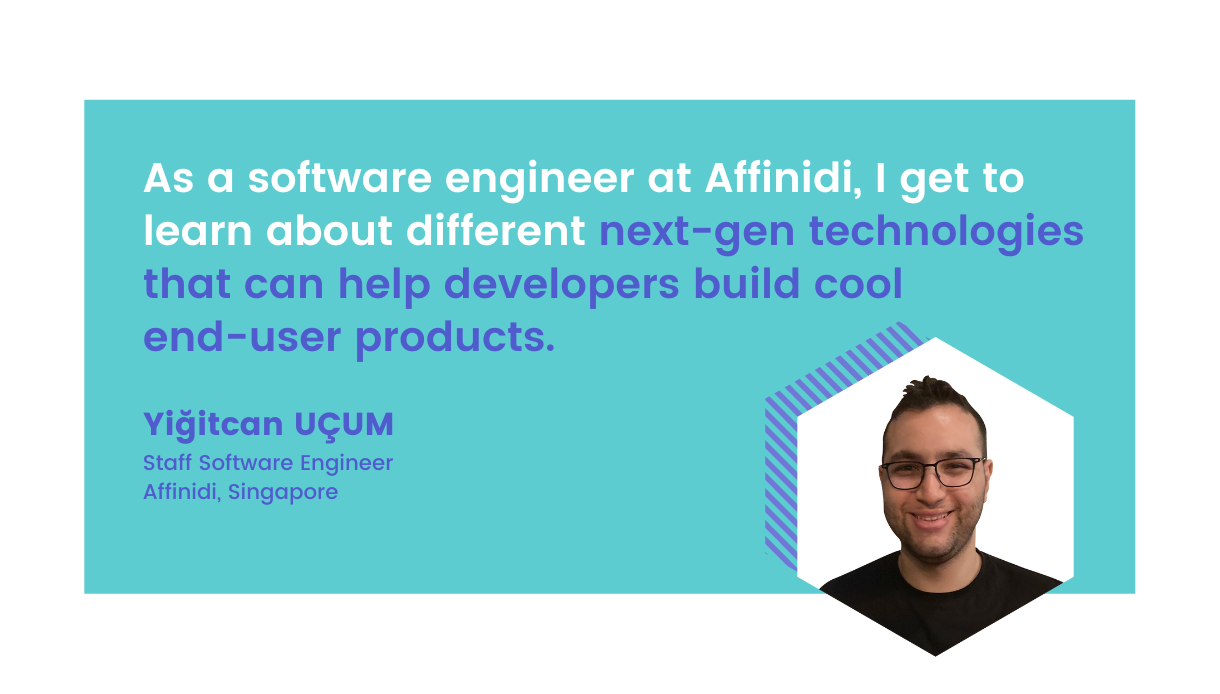 Have you ever wondered how a software engineer builds futuristic tech products? What’s their thought process? How do they go about it?

Join us, as we take a peek into the minds of one of the most accomplished software engineers in Affinidi, Yiğitcan UÇUM. We asked him a bunch of questions about his work and personal life and here’s what he said.

How would you describe your role with Affinidi in 5 words?

Affinidi develops decentralised technologies to enable people to have more control of their data, in a privacy-preserving way. We are building new products for a new world. I see my role in this mission unfolding in two ways;

What’s unique about being a Software Engineer at Affinidi? What are the downsides?

The best part about being a software engineer at Affinidi is that I get a chance to learn about different next-gen technologies that can help developers to build cool end-user products. We make it easy for many people to live and work. That’s the great part of what I do.

As for the downsides, there’s a lot of misunderstanding about what we do at Affinidi and the role of software engineers in general. When I talk to people about web 3.0, most people find it hard to relate to. They think I am building yet another cryptocurrency project!!!

What’s the most fulfilling project you’ve worked on?

The CommonCheck project.  For this project, we met governments and built products on a world-class scale. Our product really helps people, especially when they are travelling to countries for travel/work purposes.

The other exciting project is the Affinidi console that’s currently used by our internal teams. Once it gets to production, it will also benefit many. It’s something like Amazon Web Services (AWS), where you sign up to access digital identity-related products. And in a self-guided way, you can start using Affinidi products. So, I'm excited to see this go to the production stage.

Yes, we can’t wait too! And this brings us to the next question - What sparked your interest in identity technology?

I am intrigued by blockchain and decentralised apps as I believe they have the potential to drive a new wave of businesses. While diving deeper into these topics, I understood how critical digital identity and trusted data ownership topics are. Currently, the concept of data ownership is at its nascent stage. For example, in Turkey, we have an e-government website which you can use to download your educational qualifications, vehicle registrations, and a lot of other official documents through a centralised interface. But, what I can do with this data of mine is limited and more importantly, I don’t own it.

With decentralised technology, my data would be owned by me and I could share it   with other applications in a privacy-preserving and interoperable way. I would own the data even though the government entity has issued it. This concept of data ownership is close to my heart and this is one of the things that brought me to digital identity technology in the first place.

While we’re on this topic, what’s the one thing that everyone should know about digital identity and data ownership?

These topics are much more important than one may think at first glance. The ideas of digital identity, decentralised reputation and data ownership have the potential to change all the business use cases around us. They can return power to communities and smaller companies instead of centralised monopolies.

While Web 1.0 was mainly about all sized companies building their own websites as a brochure for their products and services, Web 2.0 enabled a whole new wave of digital businesses and birthed centralised monopolies. Web 3.0 gives us protocols instead of data silos and monopolies, changing the tide in favor of smaller companies and communities.

Most of the Web 3.0 products that are popular right now, do not have the identity concept in them. They are usually in the financial domain and work with anonymous accounts. For products with real world use-cases like delivering food, taxis or event ticketing; we need privacy preserving digital identity and decentralised reputation concepts.

Due to these impending changes, it’s important that people understand more about digital identity, decentralised reputation, data ownership and the benefits that will come with them.

Thanks for these insights. Apart from work, we’d like to know you a little better as a person! If someone were to spot you outside of work, what would you most probably be caught doing?

I am going to be married soon, so you’ll probably see me shopping for my dowry; kitchen utensils, home appliances, furniture, or anything. Shopping is one of the main things that gets me out these days.

I also love the fact that summer is around the corner and the weather is getting warmer. I currently live in Istanbul where there are a lot of beautiful places to go out for breakfast / coffee, especially next to the Bosphorus.

What's one thing most people don't know about you?

I watched an unhealthy amount of anime series. I’ve missed the newer seasons for the last few years so I’ve not been talking about anime as much as I used to. This may be is something that other people do not know about me.

I watched hundreds of anime series back in high school and can understand a bit of Japanese. At one point in my Erasmus Internship, I met a Japanese person who could not believe how much Japanese I could understand and how I learned it just by watching anime.

Of all anime series, I would recommend Berserk – I like it so much that I even have a tattoo related to it! I really like the Guts character and the world building in this anime, it is so cool!

If you had a superpower, it would be…

Knowing what others think!

The first person I want to read the minds of? Probably you guys! To see how you feel about my responses to this interview!